Bulldogs Too Hot For The Freeze! 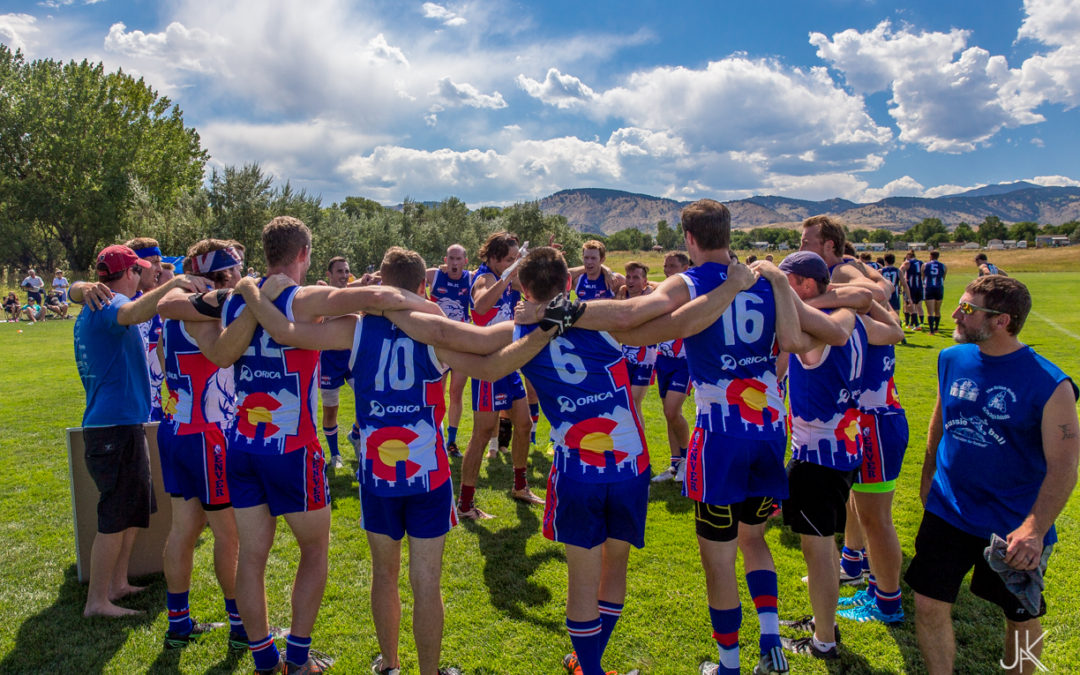 After losing to Minnesota in Des Moines only two months prior, the Bulldogs were determined to come up and exact some revenge on the visiting Freeze. Conditions were absolutely perfect for our first home game of the year, with the temperature in the 80s and the fields in Arvada in pristine condition. The Freeze were short on a few guys, so 6 Denver Bulldogs graciously accepted positions on the Freeze team for the day.

The first bounce set the scene for the remainder of the day; Phil Camping got his first of many hit outs for the day, placing it perfectly into Leigh McMahons path, who then sent a lovely looping handball out wide to the wing, where the ball was kicked to new star Forward, Paddy James. And so, the ball was locked into our forward line for the great remainder of the quarter.

Mich McGrath capaltized on the forward-entries early in the game, taking two overhead marks and converting on both set shots. Joe, Timmy, Harko and Alex Mayberry formed a brick wall across the backline, ensuring that Minnesota only had a few shots at goal for the first two halves of footy.

In the second half, Tyler Ames and Ryan Garthright were dominant in the forward line, proving far too strong for their respective opponents and converting multiple goals. Troy Kirk contributed with some excellent front-and-center work to increase the margin heading into the final quarter. Brian Rippeto probably racked up more possessions than any player on the ground, causing absolute havoc for the Freeze throughout the middle of the ground.

Minnesota had some great passages of play in the second half, winning some center clearances and exposing some Bulldogs weaknesses, but ultimately the midfielder combination of Phil, Leigh, Michio and Pete proved far too strong, winning the great majority of the contested positions and ensuring that the ball typically moved forward in the Bulldogs favor.

The win for the Bulldogs was a big one. After a disappointing showing at Westerns, the league began to speculate on how far the Bulldogs could actually go this year. While Minnesota was short-handed, they still played with some of their best, including a couple of Revolutions stars. Denver’s ability to bounce back and pile on the biggest win of the league this season suggests that maybe it would be unwise to dismiss the the Doggies as one of the contenders for this years USAFL National Championship.

Big thanks to Rich Mann for umpiring, Josh Kuehl for the amazing photos, the many supporters who showed up to cheers us home, and the Minnesota Freeze for making the journey.