WHAT IS ‘AUSSIE RULES’?

WHAT IS AUSTRALIAN RULES FOOTBALL?

Aussie Rules, also known as “footy”, is a fast-paced game like no other. In short, it involves running the ball, punting, receiving, dribbling, tackling, and, of course, scoring. Watch the videos and read on to learn more. Oh, and you’ve been warned… this sport is addicting!

WHAT ARE THE RULES?

The objective of Aussie Rules is to outscore your opponents in total points. These points are tallied by summing the goals (worth six points) scored, and the behinds (worth 1 point) scored. A goal is scored by kicking [punting] the ball (similar to an American football) through two upright posts. The ball must come off the foot of a player. So no throwing or punching it through – it must be kicked through. A behind is scored if the ball is touched by anyone, or is kicked through the smaller posts on either side of the goal posts.

The ball can be moved around the ground by either: running with it, kicking [punting] the ball, or handpassing (punching with a closed fist). Throwing the ball is disallowed.

A player can run as far as he wants with the ball (provided the player touches the ball to the ground every ten meters – usually accomplished by bouncing [dribbling] the ball).

A player running with the ball is in open play. He may be tackled by anyone from the opposing team. A tackle usually means wrapping up the player, like in rugby, but can be like a good ole American-style ‘hit’. If a player is tackled, he must make an immediate attempt to dispose of the ball (legally – no throwing now). If he holds on to the ball during a tackle (like as in rugby), he is deemed ‘holding the ball’ and the tackler gets a free kick. Now, on the other hand, it is illegal to tackle a player without the ball. So, if a player does dispose the ball during a tackle, the tackler must immediately let go.

A player can kick the ball in any direction (but of course, the objective is to get it to your goal). If any player from either team marks [receives] the ball from a kick, he may take an un-obstructed kick from that spot.

The other method of moving the ball is to handpass, or punch, the ball. But unlike marking [receiving] a kicked ball, receiving a handpass does not give you an un-obstructed free-kick. So you are in open play when receiving one of these. 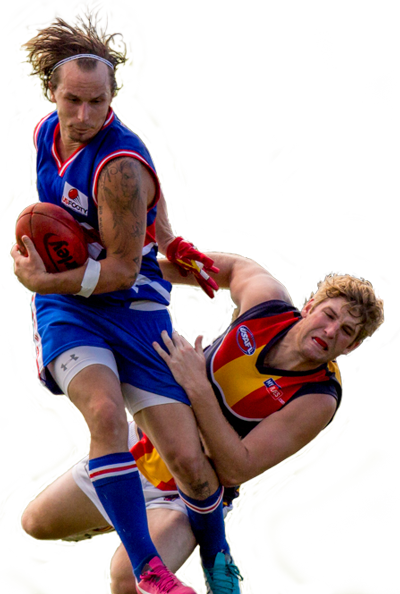 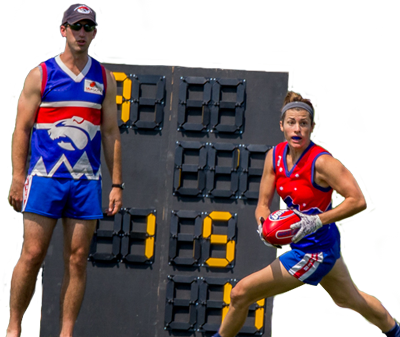 HOW DO I GET STARTED?

Join us at our weekly training session on Wednesday or Saturday. You’ll be welcomed to the session, and be given a little one-on-one instruction on the basics.

It’s a great way to keep fit, meet some great new mates and while it seems complicated, we promise it’s a lot easier than learning to throw a boomerang! To find out the details on a training session, contact us below.