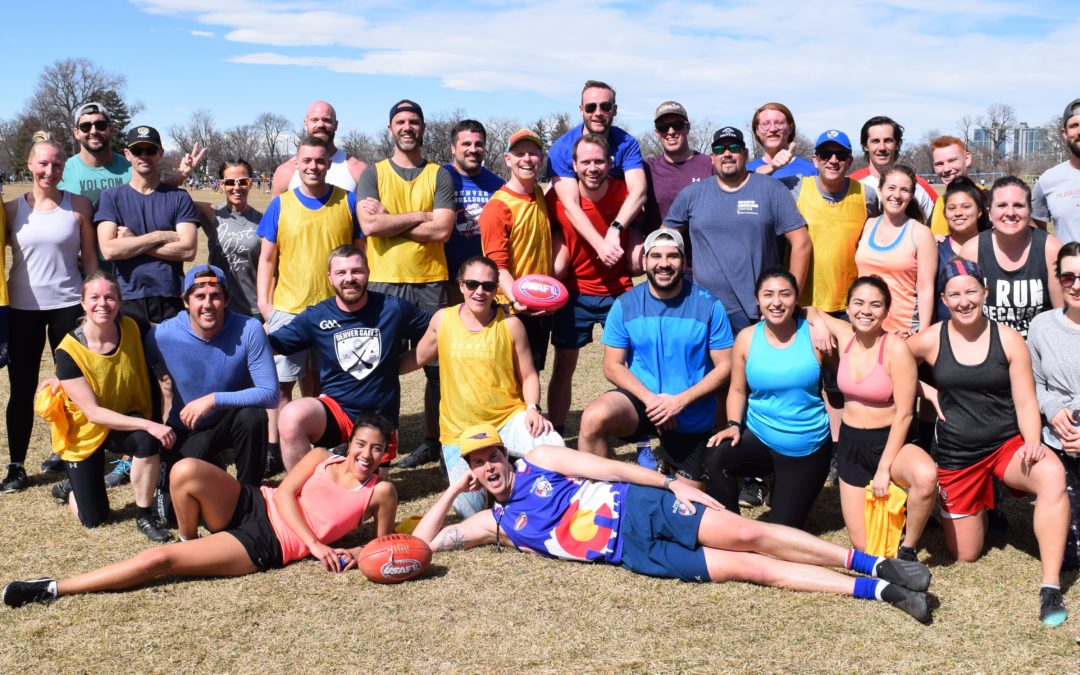 DENVER — During the abundant warm weekend days over the past few weeks, parks throughout Denver have once again begun to brim with outdoor enthusiasts eager to banish the cold grip of winter from their memories.

While swarms of joggers and cyclists have taken to the paths and sidewalks, the Denver Bulldogs Australian Rules Football Club has relished the opportunity to enjoy some quality preseason action out on the grass at Washington Park.

The Bulldogs have already gathered for four informal co-ed practices thus far in the young year, including a group of 34 attendees at the most recent session in 70-degree heat on Saturday, March 7. The team plans to continue meeting at 10:30 a.m. on Saturdays at Washington Park as frequently as possible until the team’s regular season begins on May 2, with the next session taking place on March 14.

With a combined 14 men’s and women’s United States Australian Football League national championships, the Bulldogs are as competitive as any amateur sports team you will find. However, ask anyone involved with the club and they will tell you that welcoming new people to the sport and getting them involved with the team is equally important.

The club has been ecstatic to see many new recruits getting their first taste of the sport during this year’s preseason sessions, with any and all newcomers welcome to participate.

“This is phenomenal,” Bulldogs women’s captain Anna Thexton said of the turnout so far. “We’re reaching our goals early on in the preseason, so if we can just keep this momentum, we’ll be set for the season.”

In order to help new players become acclimated to the game, the team has been focusing its sessions on basic skills instruction, followed by games of a modified, non-contact version of the sport called Aussie Ball.

“Aussie Ball is exactly the same as regular Australian football, it’s just not as physical without the tackling, so it allows the new people an opportunity to learn the skills and the gameplay and how you work with teammates,” Bulldogs President Steve Noble said. “So it’s integral to recruiting and getting new people to enjoy the game of Aussie Rules that we love.”

Seeing as many Australians consider it their life’s mission to teach Aussie Rules to everyone they may come across, the Bulldogs are more than eager to welcome people with no prior knowledge of the sport. Noble and other veterans of the team have been holding special side sessions during trainings to help brand new players learn the basics of the game, aiming to get everyone involved in a team-wide game of Aussie Ball by the end of practice.

“We have a great leadership group and some terrific coaches from Australia who are happy to step aside and teach new people skills,” Noble said. “Then they can slowly work into our practice drills, and then within one session they can comfortably step into a non-contact game of Aussie Rules and really enjoy themselves.”

Thexton has played for the Bulldogs since 2007, but before joining the club she didn’t know much at all about Aussie Rules football. Her very first experience with the game was playing Aussie Ball, and she hasn’t looked back since.

“I loved it instantly,” Thexton said. “It was just the most fun I’ve ever had, and I want other people to be able to experience that too. It’s a really great way to introduce people to the sport — they get a good feel for the flow of the game without the contact component. It’s just a safe environment for them to learn their skills, meet new people and just essentially have fun. It gets you hooked really quick.”

One of the new recruits to the team this year is Konstantin Rehbein. Rehbein has experience with Gaelic football — perhaps the closest comparable sport to Aussie Rules — but has enjoyed learning a brand new sport during the two sessions he has attended so far.

“There’s a learning curve, but everyone out here’s been real good about coaching and just giving you little pointers,” Rehbein said. “There are a lot of sports that are similar to it, but this one’s definitely different, so it’s more fun to play something that you haven’t done before.”

One of the benefits of Aussie Ball is that men, women and even children can all take the field at the same time. The Bulldogs’ Aussie Ball games this year have seen a good balance of men and women taking part, while also consisting of a good mix of veterans and newcomers.

“That’s something that I like to see,” Rehbein said of the varied levels of experience among the players. “You can kind of see people that know what they’re doing, you can get a feel of what you’re supposed to do, but at the same time you’re not in a position where you feel like you’re the only person that doesn’t know what’s going on. There’s definitely a bunch of skill levels and it’s a fun learning experience, and no one’s there to be super competitive. It’s just a fun kick-around.”

“This time of year there’s great camaraderie to share the ball around,” Noble added. “We all want to get assists, like in basketball, so everyone’s looking for their teammates to pass the ball and get everyone involved, so it’s a great time to come and learn.”

Even for people who might be hesitant to start playing a brand new sport from scratch on their first encounter, the Bulldogs welcome everyone to socialize after practices and at various other social events throughout the year. There is also a constant sideline presence of spouses, young children and dogs for anyone who prefers the spectator side of sport.

“It’s a lot of fun, everyone should go out and try it,” Rehbein said. “It’s a good way to meet a lot of friends and go get a drink after.”