The Denver Reserves started the tournament as the lowest-ranked men’s team finishing runner-up at last years Division 5 competition. That would not stop the boys going 3-0 and winning the Division 2 Central Championship on thier home ground. The first two games against Oklahoma and Dallas would see the Dogs have comfortable wins. The Reserves team was a mixed group of veterans and rookies. The reserves welcomed back Bulldog veterans Brent Dowling and Michio McGrath. They both starred in the midfield gathering plenty of touches and kicking goals on the run. Big veteran Max Eckstein lead strong from the forward line giving the Reserves a target to kick to. Max kicked vital goals throughout the day. Strong competition for positions in the Division 1 squad would see the Reserves with a very good midfield.  Phil Camping, Troy Kirk and David Villani also ran through the midfield all day. They controlled the ball across the half-forward line preventing the ball from leaving the zone and kicking plenty of long goals. Ben Harling took every mark and kicked multiple goals all day and showed everyone that this old dog still had all the tricks. Ben Marcum, Geoff Shakespear and Dylan Braun provide the team with plenty of run and attack off the bench. Rookies Marcus Casillas, Daniel Kerwin and James Madsen looked like they had been playing for years and first game big man Vic smashed and bashed his way around the forward line.

The Grand Final against the Nashville Kangaroos proved to be an entirely different ball game. The game was tight and the pressure was high throughout the entire game. The dogs continued with the pressure and a small fight in the forward line shift the momentum towards the Reserves. Goals from Drew Wolfe, veteran Max Eckstein and brilliant snap from goal sneak Steve Noble gave the Reserves a slight lead. The Denver backline was the true hero’s of the Grand Final and was lead by Veteran Bayden Goodall who made multiply game-saving plays. Veterans Rich Mann and Brian Posey controlled the ball down back all day. The ball was locked in the Reserves forward line for most of the Final half. Nashville would have one last-second push forward until Bayden Goodall would make a game-saving mark on the siren. Bayden Goodall, you star!

The Denver Reserves would bring home silverware for the men after a long 7 year absent and the club celebrate long into the night. Congratulations guys! 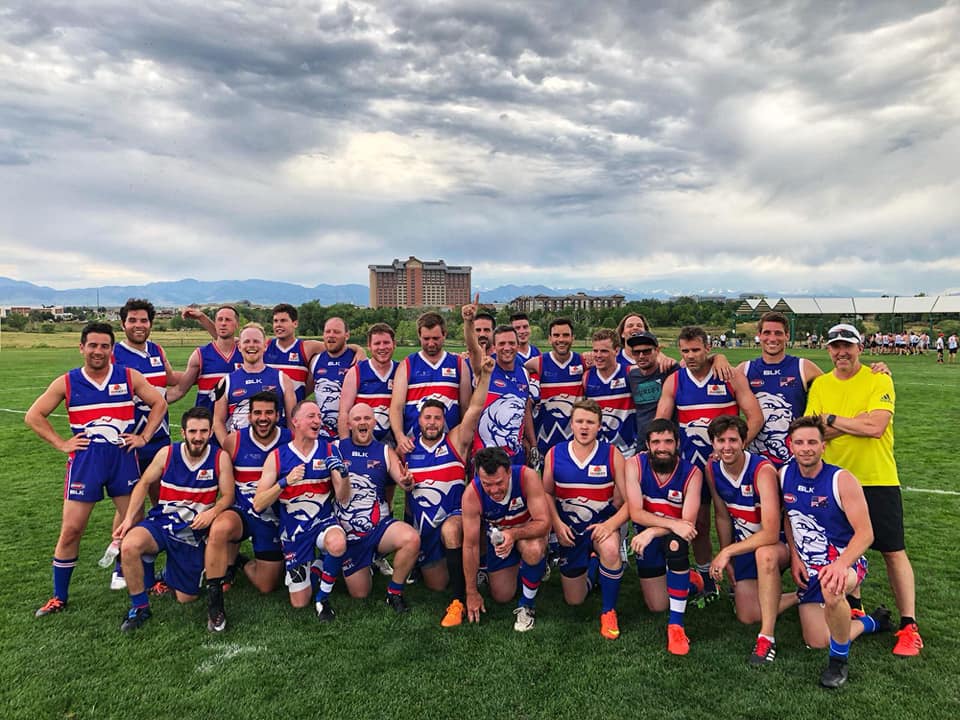 Centrals was a huge success! The Denver Bulldogs would like to give a big shout out and thank you to all the teams that came out to Colorado to play the great game of Footy!  A big thank you to all our behind the scenes volunteers who sacrificed countless hours before, during, and after to make Centrals happen. Congratulations to all the teams! A special congrats to the Denver Bulldogs Reserves team for winning their division! Great work Doggies! And another special shoutout to the Denver Lady Bulldogs for being the first women’s USAFL team to bring two full teams to a tournament. Way to grow the game for female athletes everywhere! Thank you also to Brian Barrish for announcing all the games, all the athletic trainers for keeping our players safe and healthy, and the countless others who assisted in the day! Thank you to our sponsor The Irish Rover for hosting our after party!

We appreciate everyone that came out to play, support, and assist with Centrals! Thanks for making it a great day for Australian Rules Football!