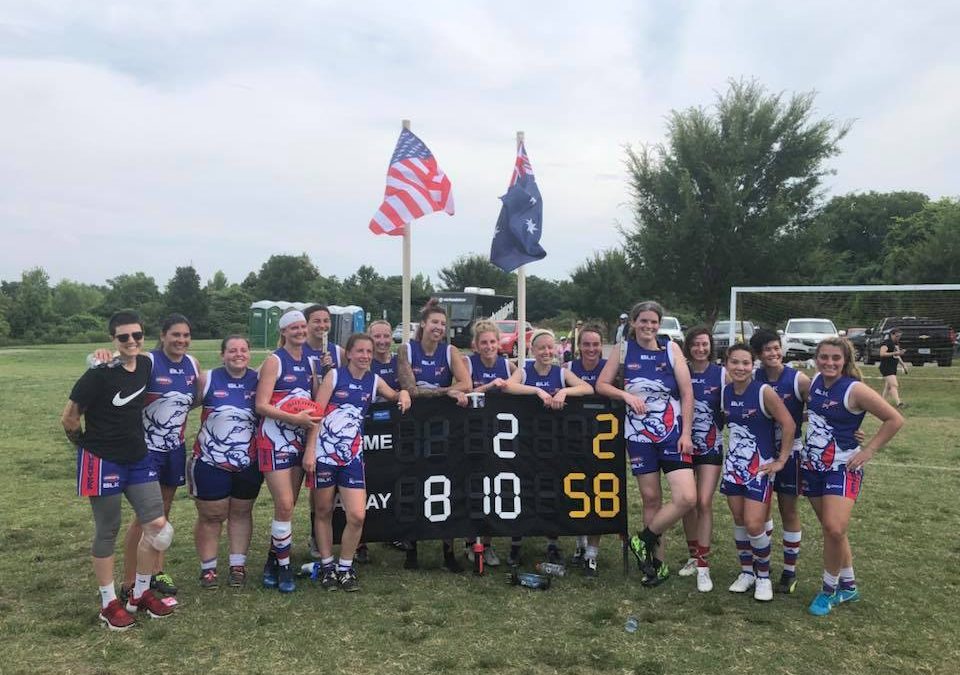 After hitting their stride in the second half of game one, the DLBs came out hard against an organized Texas Heat in game two. Midfielders Hallie Kastanek, Alison Bremner, Baylee Hurtado and rookie Alexis Koo held strong, keeping the ball in the DLBs offensive half for most of the game. Veteran forward Sara Rohner caused a stir with a specky in front of the Denver goal posts. A huge win allowed the Denver Lady Bulldogs to bring home some pretty hardware, marking their second conference championship in just as many years.

A quick trip to L.A. in August, followed by a USAFL developmental camp, and a potential home game versus the Texas Heat may be just the amount of on-field experience to help the DLBs bring the national title home once again.
Special thanks to Phil Camping for stepping in to guide the ladies to their wins.

The Bulldogs first match of the day was at 11am against Chicago. The doggies were pumped to get off to a great start and get some payback for the loss early in the year. The dogs forwards were on fire early with Lockie Fleet taking strong marks on the lead, Troy Kirk roving the front of packs and Nick Garcia finding room to himself down deep. Lockie and Troy went goal for goal early. Dave Nelson was given the job of preventing the swans best player from getting the ball. Alex Mayberry, Dan Umbdenstock and John Clayton were like brick walls down back and would keep the swans to only 2 goals. Phil Camping, Cameron Freeman and Brandon Kaufman were racking up the possessions through the middle of the ground. The ball was coming in so fast to the forwards it was easy to convert quickly. Paddy Devlin and Tom Ryan were strong across the half forward line creating chances. Luke Durkin and Drew McMahan were creating space along the wings and kicking the ball in long to the forwards. Tom Harkness and Jared Thomson ran freely off the half backline send the ball again forward. Steve McVicker and Geoff Shakespeare came of the bench to provide link and handballs across the half forward line. Fleet, Kirk, Ryan, Devlin and Garcia were great together up forward helping the dogs to a big win.

The dogs knew they were in for a battle against the crows. The dogs started well but Fleet and Kirk missed some opportunities. The Bulldogs battled with Austin for the first 10 minutes until the strong crows broke away. The forwards did not see much more of the ball. The midfielders battled hard and the defenders were under the pump. There was not very much to cheer about for the rest of the game. Cameron Freeman bought a smile to the dogs with a huge mark over a Austin player across the half backline. The dogs battled to the final siren but missed chances and a much better crows side went on for the win.

The third and final match for the Denver men was the battle for 3rd spot. It had been a hot day and the dogs were tired. Unfortunately the bulldogs started slow and let the magpies get out to a handy lead early. The dogs were being out played all over the ground. At half time captain Harko expressed his frustration and asked for more in the final half. The second half would see the bulldogs battle for the ball in there defensive half. Mayberry, Clayton and Ubdenstock played strong and repelled the attacking magpies. Devlin was moved into the ruck and start winning the ball for his midfielders. Once again Nelson was given the tagging job on the magpies best player. This helped Freeman and Kaufman to start gathering the ball. Both players ran and tackled hard willing the ball forward. Shakespeare came on and gave a fantastic look away handball to Camping who kicked Denver’s first. Fleet battle a calf injury but was able to mark strong and convert twice. The dogs pushed hard with Ryan and Kirk missing snaps from the pocket. Kaufman hit the post after taking players on through the middle. One last push would see the dogs miscommunicating down forward, letting the ball skip past for another behind. The dogs would fall by 4 points and a thriller.

Congratulations to Cameron Freeman, Dave Nelson and Tom Ryan for their first Denver Bulldogs games. Also a big thank you to the Nashville players who helped us out on the bench.