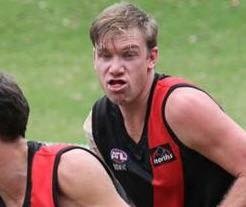 In 2016 we introduced the new player spotlight series. In 2018 we are bringing it back, we’ll introduce you to one of our up-and-coming Bulldogs stars each week. This week, we’d like you to meet Jarryd Watters. Jarryd made his bulldog debut during the 80/35 tournament in Des Moines where he starred as one of the Bulldogs best.  Jarryd brings a wealth of experience from his years of footy in Australia

Q: What sports did you play prior to giving Aussie Rules footy a go (or previous footy clubs)?

Q: What attracted you to footy?

it is the Best sport in the world.

Excuse to give co-workers a black eye

Q: Best memory as a Bulldog so far?

Jezza swimming in his bear suit.

Q: What are your personal goals for this year?
Winning a National Championship

Thanks Jarryd for being one of many great new players this year. We are excited to watch you star in the bulldogs midfield this year.