Bulldogs Win the 80/35 Tournament in a Nail Biter! 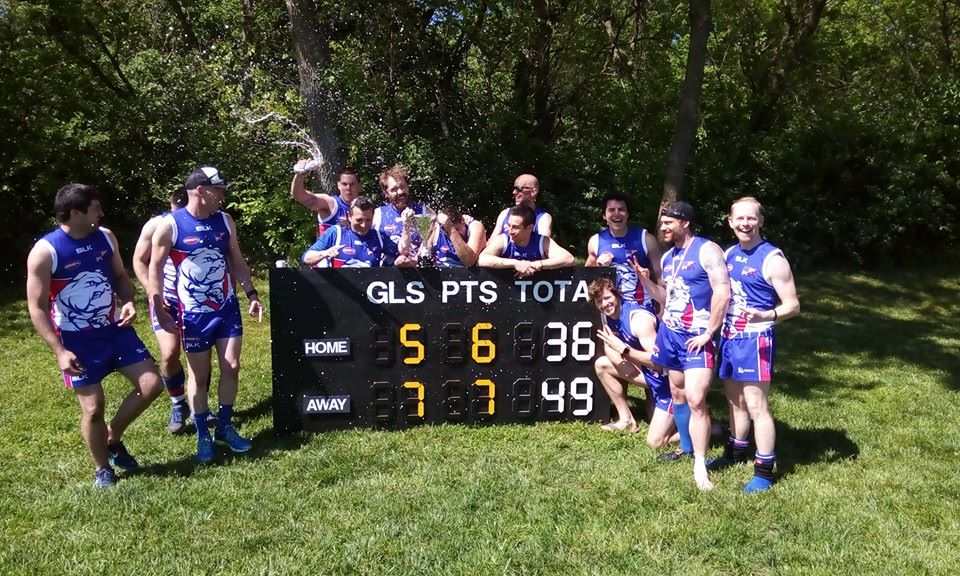 Thirteen Denver Bulldogs, including two new rookies made the 10 hour drive north east through Nebraska to Des Moines for the season opening 80/35 Tournament. The Bulldogs have won this tournament 3 of the last 4 years but have traveled with larger numbers and more experienced groups in the past.

With the last of the team arriving after 3am it was always going to be interesting to see how the team performed in their first game against the home team. Assistant Coach Harko designed a game plan around kicking long and running hard but with new players and only a few weeks of training for the team to gel it was going to be a challenge. Led by captain Aaron Summers, the boys had a strong wind behind them in the first half and took advantage of it. The ball was coming out of the middle quickly thanks to some good rucking by the combo of Wufy / Phil and the in and under work from Mich. Nick and Bob both kicked goals early to give the Bulldogs a lead going in to the second half.

Despite kicking in to the wind after the break the Bulldogs increased their lead thanks to the rebound efforts in the back line by Harko and the Posey twins. Inaccurate kicking up forward saw the Bulldogs waist some opportunities but still come out on top 8.10.58 to Des Moines/Tulsa 4.4.28.

In the second game the Bulldogs faced Minnesota, a club that has had the wood on us recently and are packed full of mid-size hard running Americans and a few good Aussies. Kicking with the wind in the first half the Bulldogs were wasteful with several costly turnovers down back and missed opportunities in front of goals. Flashes of brilliance from Wufy in the middle and hard straight-line running from rookie Colin were promising, however, with Minnesota playing one of their best Aussies down back as a loose man in defense they managed to bring the ball out time and time again. The Bulldogs went in to half time down by a goal.
Coach Harko rallied the boys at half time and made some changes to set ups. The Bulldogs kicked the first goal of the half and were in front on the scoreboard for parts of the half thanks again to the work from the boys down back and tight man on man football from Steve McVickers and the mids. Injuries to Aaron, Nick and Bob in the second half saw the bench and forward line thin out and ultimately Minnesota took advantage of this fact and the game to kick the last two goals and run away winners 5.7.37 to Denvers 3.7.25

Going in to the final game all clubs were faced with the interesting scenario of being tied at 1 win and 1 loss, so the final games and percentage would be used to determine the winner. With this in mind and the Bulldogs went in with fire in their bellies. Kicking in to the wind in the first half the Bulldogs dropped an extra defender back leaving the forward line a man down. Luckily Wufy stepped up and snuck forward to kick 2 goals in to the breeze staking his claim as a potential forward line player this year. The Bulldogs went in to the half 7 points in front however they knew then would need a win and a percentage booster to secure a championship.
The second half was all about rookie John. He kicked his first goal as a Bulldog and almost got his second soon after. His tackling and attack on the football was something that even the seasoned Aussies could learn from. Other players to save their best football of the trip for the do or die last half were Steve Nobel who kicked an important goal and Phil Camping who stepped up to give the bulldogs some aerial support against Chicago’s tall timber. The final few minutes of the game were frantic with the Poseys, McVickers, Mich and Aaron getting plenty of crucial possessions to help seal the win 7.7.49 to Chicagos 5.6.36

After the scores were tallied the Bulldogs were crowned champions over Minnesota on percentage and skipper Aaron was named among the best of the Tournament. Adam Wufsus won the Players Cup for his consistent work all day and for kicking some crucial goals. Brian Posey won the Clanger Award for telling everyone he was ‘turned on’ rather than ‘switched on’ during the Minnesota game.
Well done to the boys who made the trip and to the rookies who stepped up and made the club proud. Next stop is Indianapolis for Centrals Championship.