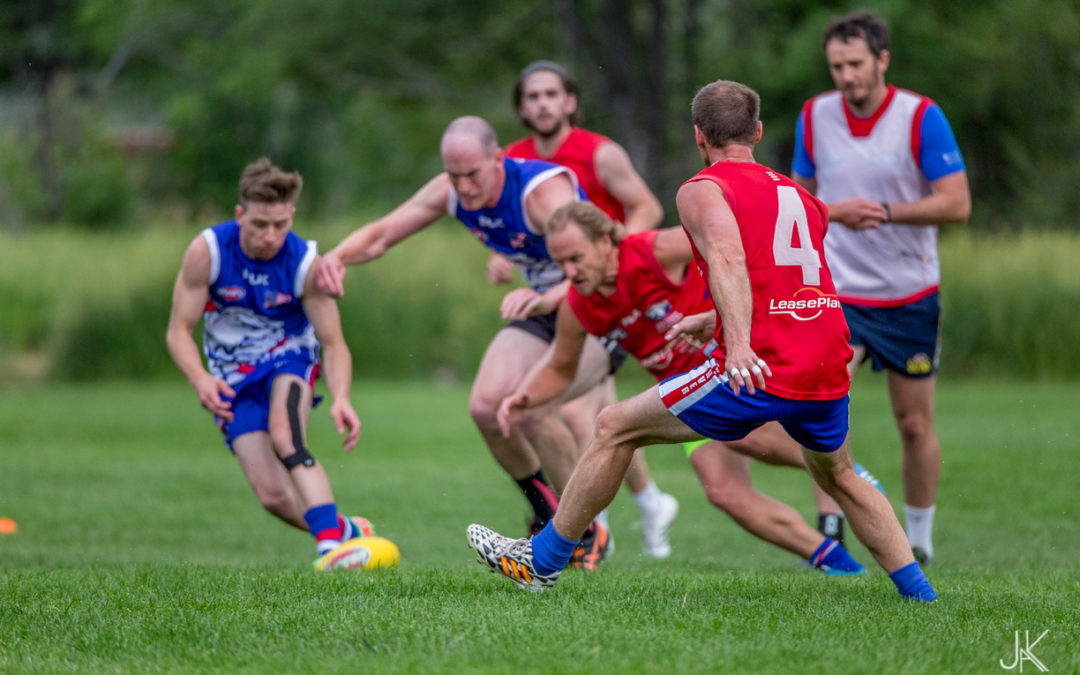 Sunday July 10 was forecast to hit 99F, yet 28 Bulldogs competed in game 5. With Robbos return to the Dingoes and needing to even numbers, the Dingoes would loan new recruit Paddy to the Kelpies, so both teams had great targets up forward. The Kelpies started just like they did in game 4; they moved the ball well and fast into the forward line allowing Bruce, Sean and Paddy quick goals. The Kelpies jumped out to a 3 goal lead before Robbo marked and kicked the Dingoes first major 10 minutes into the first. The ascendancy started to swing towards the Dingoes and they certainly had their share of the ball, but in a congested forward line, goals were hard to come by. Oscar did manage a goal from great running play. At the first change the Kelpies led 4.2. 26 to the Dingoes 2.2. 14.
The second was fairly even as the ball ebbed and flow with only 14 players aside, there was plenty of room for players to run the ball and both teams had clean possession and showed off their skills. Robbo kicked 2 goals and Max one, with great running play so the Dingoes would win the second on the scoreboard with 3.2 to the Kelpies 2.3 since midfielders Harko and Marcus kicked 1 goal each. But the Kelpies still had a narrow lead of 1 goal at the final change.

The heat was in the 90’s by the third and water was everyone’s friend. The Dingoes backline was terrific and Alex and Noble were tested multiply times. Big marking forward Paddy, and the elusive Bruce each managed a goal for the Kelpies. The tireless work of Oscar, Max and Andy kept moving the ball forward but the Dingoes could only manage one major through Nick G in the last. New recruit Jo was terrific and a standout all day in defense for the Kelpies. The Kelpies would win by 13 points in a scorcher.